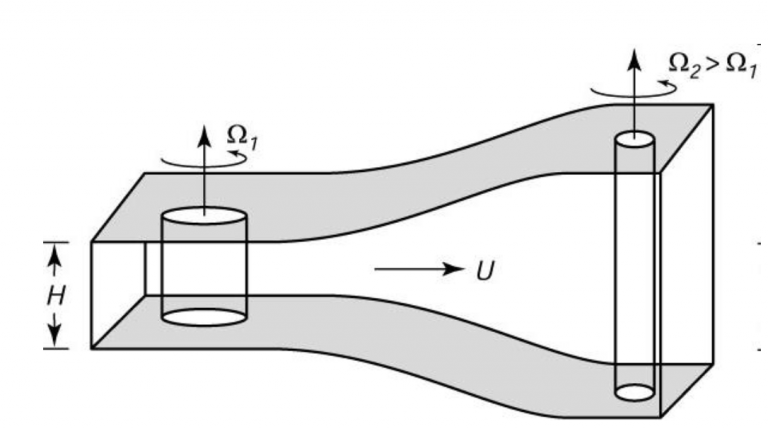 This is based on a lecture by Paul Spence from Winter School 2014 at the ARC’s Centre of Excellence for Climate System Science. The video of said lecture is available here.

When talking about solid body rotation, we often refer to conservation of angular momentum. For example, if you’re spinning in a chair and all of the sudden extend your legs and arms, your rotation will slow. This is because you have increased the radius of the spinning object, which leads to a decrease in the rotation rate to conserve angular momentum. As long as you don’t put extra energy into the system (e.g. by pushing your feet against the ground or deliberately twisting your body), this will hold true.

In fluid dynamics (and geophysical fluid dynamics in particular) there is a similar concept called the potential vorticity, or PV. In a system without frictional or diabatic (involving heat transfer) processes, this quantity is materially conserved. This fact – the conservation of PV – can be used to explain a variety of geophysical phenomena, such as western intensification and the westward propagation of Rossby waves. But before talking about PV, we need to talk about plain old vorticity, which is defined as the curl of velocity and gives a sense of the local rotation rate in a fluid. For geophysical fluids specifically, the most important component of vorticity is typically in the vertical direction, due to the low aspect ratio of these fluids (i.e. vertical motions are small):

Vorticity is closely related to circulation:

So vorticity is the circulation per unit area.

Now that we know what vorticity is, we can move on to talking about potential vorticity.